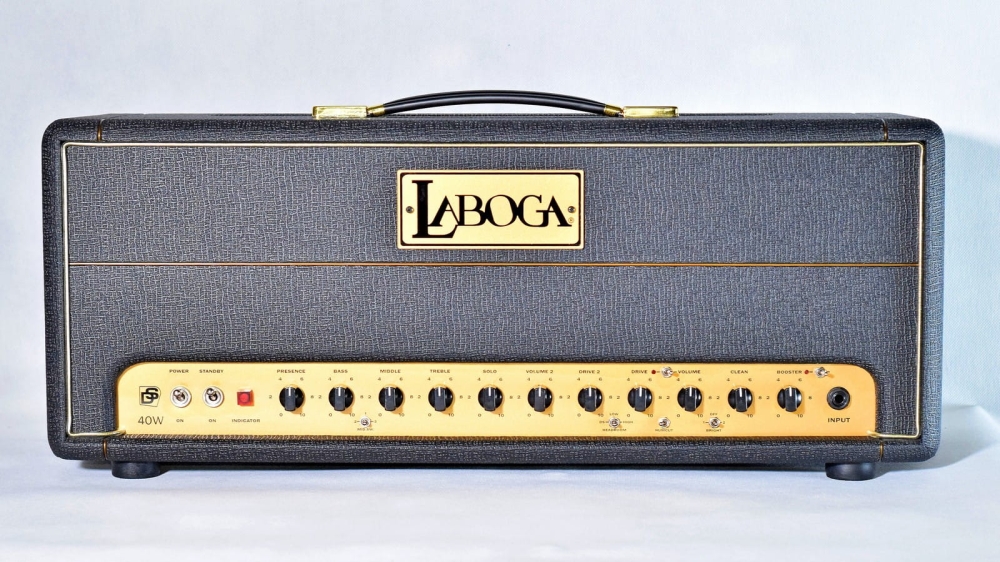 The DS is an exclusive line of amplifiers that are hand-made in Wroclaw, Poland. The available combinations of the DS40 will include a Head, a 1x12 or 2x12 Combo as well as a dedicated Laboga Diamond Series 212/ 412 speaker cabinet.

For the construction of each amplifier,  Point-to-Point technology was used.

The DS40 is a three channel full-tube design that is built in the same manner most amps were built in the 1960s and 1970s, with technology point-to-point. This solution has enabled the designer (Adam Laboga) the implementation of all construction plans and maintaining the sound of a hand-made amplifier built with traditional elements and made from the highest quality.

The DS40's design did not implement the use of a single chip or transistor in its preamp section.

A three-way switch "Mid Switch" is used for tone control which changes the nature and coloring of the tonal range. Different settings of this switch result in the frequency shift of the Middle filter tone control and change in the amount of bass.

Booster: The system uses an ecc83 tube parallel connection, which is rare in tube amplifiers (two halves of the tube are connected in such a way that one large triode is formed). This solution is characterized by improved signal noise ratio by 4 dB, less harmonic distortion and greater gain compared to a typical single triode application. The tube's working point has been set to achieve the strongest gain while ensuring the widest frequency range, which combined with the location of this system in front of the entire preamplifier, makes the biggest difference when running from the guitar to the preamp. Any sound created from death notes, palm muting or any other articulation is strengthened and enriched with a second harmonic. From the guitarist's point of view, an incredible tool is provided that, in combination with the Diamond Sound preamplifier, can be used as a clean booster. This simply increases the volume as well as a perfect 'boost' to the clean or distortion channel that saturates the tubes and complements the sound with  extraordinary depth. There is simply more of everything you are looking for in this Diamond Sound line.

As an example, when using the clean channel and setting the Clean potentiometer to 5, Volume 1 to 4 and Booster potentiometer also set on 4, we get a classic volume boost with a slight addition to the sound with the aforementioned second harmonic. One instantly get that's, “Wow, can I get more of that?” factor that everyone looks for. By further manipulating the Clean potentiometer in the direction of 10, as a result, opening the preamp to the effect of the booster, we get fat crunch with a distinct grunge claw. With these settings of the Clean channel (Volume 1 on 4, Clean on 10), by lowering the Booster potentiometer further, the clean channel tubes are activated, which gives us a second overdriven channel with a stout and robust center with a strong bottom; suitable for riffs on lower strings in a hard climate centered around rock. By using Booster on the distorted channel we get access to the entire range with endless possibilities directed towards very heavy sounds.

Headroom Switch is a three-position switch that allows you to change the operating point of the first tube responsible for the distorted channel. It introduces the ability to control the depth of "clipping" of the signal by this part of the preamplifier. The position marked "DS" indicates a standard operating point, and thus a typical DS sound. The middle position 'Low' means a very deep 'clipping' of the signal, which translates into a rather dark sound, suitable e.g. for overwhelming, muting palm riffs in a D drop tuning. The second extreme position described 'High' sets tube operation for maximum signal amplification in its entire frequency range. In this situation, the sound turns out to be much brighter, sharper and supplements higher frequencies and their harmonics which is ideal for fast, melodic and shred solos.

Drive 2 is a duplicate Drive 1 potentiometer that allows you to control the level of gain. Both potentiometers can be set independently of each other using a footswitch, which allows two different distortion characters.

The amplifier is a three-channel, full tube design. It was built like in the 60-70s, i.e. in point-to-point technology. This solution enabled designers to implement all construction plans and maintain the sound of a hand-built amplifier using traditional elements of the highest quality.

"Mid Switch", a three-position switch that changes the nature of the color center adjustment system. Various settings of this switch result in shifting the Middle frequency of the tone control filter, as well as changing the bass content.

In addition, the clean channel has a "Bright" switch that allows you to select two different ranges for brightening the sound. Thanks to this solution we can get sounds from dark to crystal clear and bright.

The "Solo" potentiometer allows you to set the second volume level on the distorted channel, the so-called afterburning.

The amplifier plays with a wide band with amazing dynamics that perfectly reflects articulation and has a large gain range on the distorted channel. You can get sounds from blues to metal only using the guitar plugged straight into the from of the amp, without any pedals.

The above product is the result of 45 years of the "Laboga" tradition which was started by Adam Laboga and utilizes our vast experience, knowledge and proprietary technical solutions.

Common tone control for both Treble, Middle, Bass, Presence and a Mid Switch,

Bright switch for the clean channel,