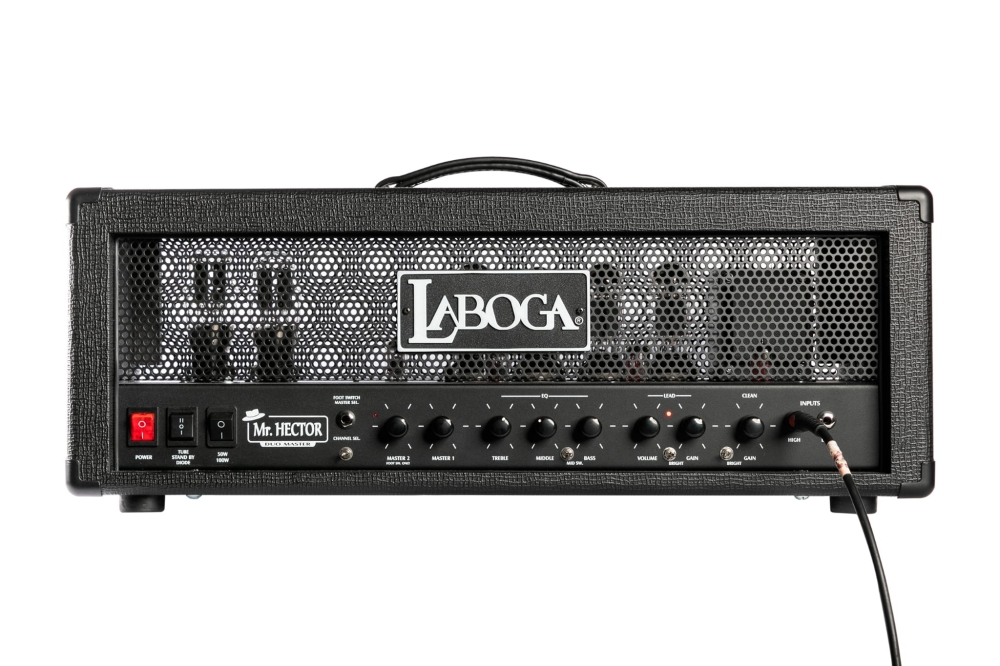 While designing the Mr. Hector amplifier we were thinking about guitar players who usually lack gain. 100W power amp is built with 4 5881 (6L6WGC) tubes. The preamp uses four 12AX7 tubes. Two 5C3S (5U4G) tubes utilizes the power supply. Tone control for both channels is used. Footswitch changes over the channels and lets to switch between two Master Volumes knobs. Important fact is that switching Masters can be done in the distortion channel as well as in the clean one. This feature gives you a possibility to rapidly change volume while playing the solo parts just by hitting the footswitch button.

On the the front panel where the "high" and "low" input jacks sit, we can find also the rectification mode switch and power mode switch (50W / 100W). The Mr. Hector is equipped with line effects loop, direct balanced symetric output (with line signal level and guitar speaker simulation) and some speaker outputs 4, 8, 16 Ohm. The output for 8 ohm and 16 ohm are doubled (in series connection) which gives the possibility of connecting additional speakers directly to the amplifier.

The rectification mode switch allows to choose between the plate supply voltage taken from tube rectifier or semiconductor rectifier. Tube rectification gives more of compressed sound, while the semiconductor rectification gives higher headroom and fast punch. The results can be heard especially while playing loud. Both channels contain a high frequency "bright" boost, used with a little gain, causes distorted character change - the sound is then similar to typical Vintage constructions.

The Mid Switch changes the parameters of the tone stack circuit. In each position of this switch a different frequency of the middle filter is applied, which also influences on the other frequencies. Both Mid Switch positions has a completely different sound character and different frequency operation. The first one gives larger content of bass and it is similar to classic sound which is typical for high gain tube amps. Another position gives the sound similar to Stomp Boxes. The most radical change of the tone can be obtained especially with less “Middle” knob setting. Distorted channel provides even more sound varieties: from Rock, Thrash, Metal, to Death Metal.

The clean channel has a fat modern tone. In the max. Volume knob setting of the clean channel it is possible to reach a crunch tone (depending on the pickups signal level). In the lowest position it's gain but the sound of it is different. The users that don't use a clean channel may turn it down and use this channel as a mute function.

We recommend using dedicated Laboga Mr. Hector cabinet designed for the heavy types of music. This cabinet utilizes two Celestion Vintage 30 speakers and one ElectroVoice Black Label speaker. You can also use the Laboga 412 cabinet with Celestion Vintage 30 and G12T-75 speaker.

Opinions about the product (1)

This amp..and what an amp it is, after going thru many high gain amps searching for that perfect chunky, crisp and saturated tone...look no more! This amp made me stop this search because off its unique and simple setup, you will get your sound pretty fast and focus on playing. It handles modern, thight trash, 90&quot;s as well hair metal, on top off that the clean channel is damn cristal clear, Witch is important for me. To this day i run two mkiv with two 412 and don&#039;t think i will change for anything. This amp has gain for days..and then some, Definitely for hard rock or more. I run a 6 string LP drop-c with emg and thats it, its just so tasty with that diode, fast palm mutes that comes thru easly. Sometimes using a 7 string with passive drop-a and still i get that roar from this amp. It takes pedals well and it&quot;s a pretty non noise amp i must say. My experience with Laboga and the brand has been flawless.